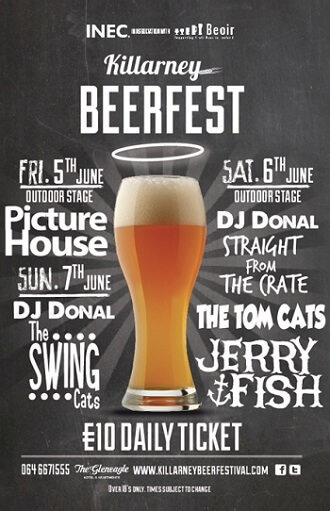 Something is brewing in Killarney this June

Brewing up a Storm in Killarney

Treat yourself to a selection of Heavenly Brews at the inaugural Killarney Beer Festival June 5th-7th.
The best of Irish Craft Brewers will descend upon Killarney and bring with them kegs of crafty Beers to get your taste buds tingling. In association with Beoir Ireland, this chock-a-block weekend includes Beer tasting, masterclasses, awards, competitions, an artisan food village and live entertainment.

Don your beer goggles and prepare to be converted when you listen to the passion of our brewers as they thrill you with stories of hops and barley leaving you gasping for a craft Beer.

The league of extraordinary Beer drinkers in the guise of Beoir Ireland will debut a major new awards programme with over eight categories including Pale Ale, Dark Ale, Wheat Beer, Porter & Stout, Sour Beer and a Beoir Champion Beer of Ireland will be crowned at the Festival. The awards are open to all Irish Breweries North and Judges will hale from independent Beer consumer groups such as Beoir, CAMRA and other EBCU members.

Does your Beer have what it takes?

Sit back and sip your stout with live entertainment from Picture House, Jerry Fish and The Swing Cats and stroll through our Artisan Food Village armed with your fork to taste the best of authentic Irish food.

There has been an explosion of new breweries in Ireland over the past year providing greater choice and better quality beer and cider, Beerology isn't profession yet but earn your degree in Killarney and become a craft beer connoisseur at the ultimate Beer tasting extravaganza.