The Curious Life Of Enrique The Inflatable Man 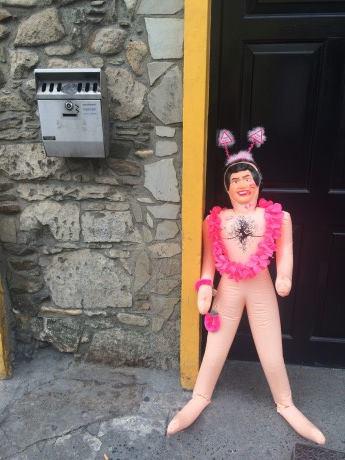 It’s Sunday evening. Hen parties across Ireland return to their homes after a memorable weekend away. They change into their comfy clothes, break out their comfort food and begin to binge on Netflix until the Fear truly sets in.

As these hen party revellers unwind and allow the alcohol to slowly leave their system they start to recall their antics of the last 72 hours. They replay the hen party activity they took part in. The accommodation they stayed in, the theme they chose and the hen party accessories they wore. Oh, so many willy straws.

There is however one person, a character, the fulcrum of all the hen party shenanigans that get lost and not remembered in it all. Enrique! Enrique the inflatable man.

Enrique started life out as a hen party accessory that you deemed necessary to join you on your hen party pub crawl. Little did you know the impact he’d have on you. You may have spent a few minutes filling him with air, but what you were doing was filling him with life, soul, charm and charisma.

As his drawn on hairy chest expanded so did the hen party’s love for this inflatable lothario. As with all inflatable men on a hen party, his name took some time to figure out. Dark hair and that Latin look meant he was always going to have a name that rolls off the tongue with passion and flare.

Enrique was the strong silent type. He understood and words weren’t needed.

Enrique accompanied the hen party group, like an inflatable bouncer, to whatever chipper or fast food outlet took their fancy. He watched manfully over them not once asking for some of their chips, cheese and garlic.

He helped everyone back to the taxi and up the stairs in the hotel to bed. Enrique didn’t try anything. A gentleman never would. He was happy to sleep in the corner after playing his part in a memorable night for the bride to be.

When everyone woke up from their prosecco fuelled slumber Enrique was there waiting to help in any way he could. His face would remind you off a particularly funny moment from the previous night or spark your memory to look at that funny picture you took in the club, the pub or during the hen party activity.

There is a great debate at who Enrique will go home with. So many hens’ hearts touched. So many want him to live on longer than the hen. To enrichen their daily lives. Maybe he’ll have a special seat reserved at a table on the wedding day?

When arrives in-home, Enrique never judges your cure. He is simply there for companionship as you order the mega meal deal from Dominos and watches some of your favourite shows. He’ll support you in all your good intentions for the week to come. He knows how big a weekend it just was.

Enrique is a lover, a friend, a companion and always up for a party. He has but one fear. To be forgotten, or even worse deflated, about how he added to the hen party shenanigans. How he enriched lives if only for a brief time.

Check out our online store ladies for all our lovely blow up men ;)
Back to Blog